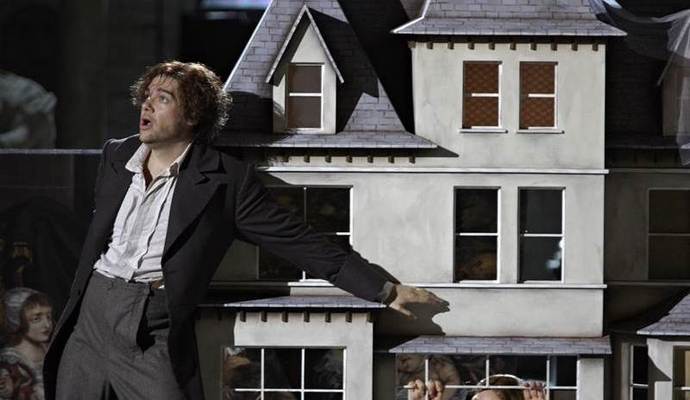 Edgardo Rocha returns to this incredible role of Arturo from Bellini’s Puritani on  May 21st 24th 27th and June 16th 23rd 26th at Staatsoper Stuttgart. Due to the obtained success after his debut in the role in July 2016, Edgardo starts to be a celebrated Arturo.

I puritani (The Puritans) is an opera in three acts by Vincenzo Bellini, although it was originally written with two acts and changed to three acts on the advice of Gioachino Rossini with whom the young composer had become friendly. The music was set to a libretto by Count Carlo Pepoli, an Italian émigré poet whom Bellini had met at a salon run by the exile Princess Belgiojoso, which became a meeting place for many Italian revolutionaries.

The subject was Têtes Rondes et Cavalieres (Roundheads and Cavaliers), written by Jacques-François Ancelot and Joseph Xavier Saintine, which some sources state was based on Walter Scott’s novel Old Mortality, while others state that there is no connection.[3]

When Bellini arrived in Paris in mid-August 1833, he had intended to stay only about three weeks, the main aim being to continue the negotiations with the Paris Opéra which had begun on his way to London a few months earlier. However, these negotiations came to nothing, but by October he had decided to spend the winter in that city, especially as both Il pirata and I Capuleti e i Montecchi were to be given by the Théâtre-Italien that season.

The offer from the Théâtre came in January 1834; he accepted because “the pay was richer than what I had received in Italy up to then, though only by a little; then because of so magnificent a company; and finally so as to remain in Paris at others’ expense.”

Scroll back to top