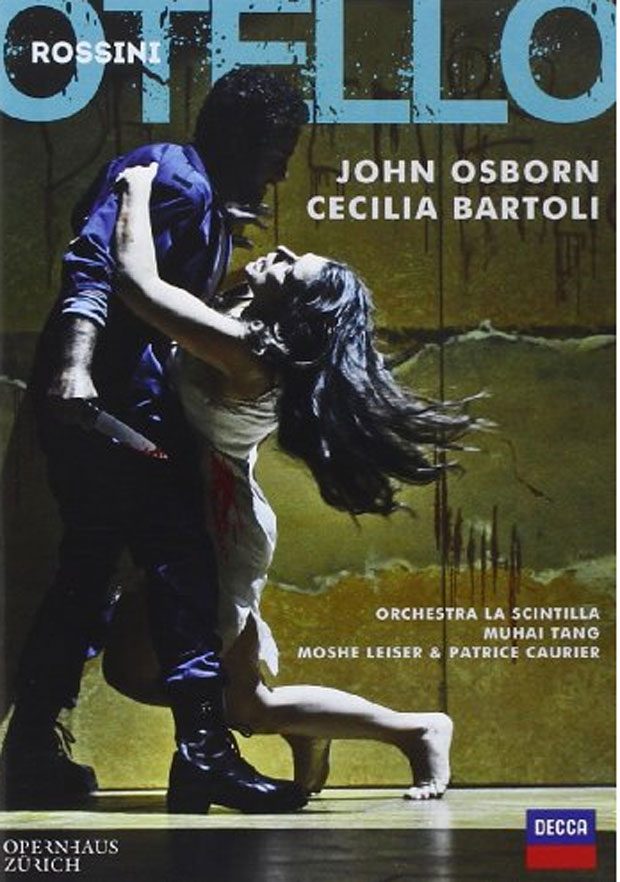 This new disc from the Zurich Opera presents just about as thoughtful and coherent account of Rossini’s Otello as one could hope for. This isn’t the first time the company has made something of a splash with the bel canto repertory. Some will remember their CD release, a few years back, of Bellini’s Norma, also featuring Bartoli. That set got very mixed reviews, and those who hated that will probably hate this too, no doubt before they even watch it. But for those not initiated in the trench warfare that music loving often attracts, this disc will be most welcome. The world class cast, led by Cecilia Bartoli and tenor John Osborn, are (mostly) young, committed and talented. They deliver, here, an intense performance that makes a very strong case for this neglected opera.

Although in the past I’ve never been entirely sold by Ms. Bartoli’s singing, I was moved by her performance on this disc, as well as her aforementioned Norma. So I guess I’m starting to be intrigued. In her Act II duet with Terzetto with Otello and Rodrigo, and her duet with Otello, she is very persuasive indeed. Her electrifying rendition of the Willow Song in Act III will break your heart and make you forget Verdi, if only for a few minutes. . Too often, her voice sounds punchy, and in florid passages, she sometimes achieves rhythmic clarity at the expense of tonal clarity. Her singing line is always tender, but often bordering on brittle, and here, there’s some of that, especially in the first Act. But the fact is, Desdemona doesn’t have a great many big numbers all by herself. In the title role, Osborn is a little stiff at first, but starting in the second act, he shows a dramatic concentration that matches his florid and incredibly accomplished vocal line. Still, dramatically, he’s rather monochrome, but this is Rossini’s, not Verdi’s Otello, and sometimes the music is more well-behaved than the dramatic situation it sets. Equally entertaining are tenors Javier Camarena as Rodrigo, Otello’s rival for Desdemona’s affections, and Edgardo Rocha as Jago. Orchestra La Scintilla, the house band for the Zurich Opera, conducted with vigor and finesse by Muhai Tang, play expertly on period instruments or copies, and demonstrate persuasively that Rossini’s orchestra was more than just a “big guitar”, as Wagner supposedly intimated.

Because, at least during the first two acts, Rossini’s opera bears scant resemblance to Shakespeare, and because it was effectively and completely replaced in the repertory by Verdi’s opera on the same subject, Rossini’s Otello comes to us today as something of an oddity. Composed relatively early in Rossini’s career (in 1816, Rossini was 24), Otello was an enormously popular opera throughout the 19th century. Between it’s premier in 1816 and the late 1870s, it was performed repeatedly from St. Petersburg to Mexico City and most stops in between. After the premier of Verdi’s Otello in 1887, however, Rossini’s Moor disappeared altogether for over a century. In 1978, Philips released a landmark audio recording under conductor Jesus Lopez Coboz, featuring a cast led by Jose Carreras and Frederica von Stade, which has since attained a semi-legendary status.

Successful as that album was and continues to be (although Philips doesn’t really exist anymore, and the recording appears to be officially OOP, copies are not that hard to find), Otello is still rarely offered on stage. I think there are a number of reasons for this. For one thing, it requires 3 tenors capable of sustaining extremely florid and technically difficult musical lines, who can sound differently enough from each other to distinguish them in the ensemble music that dominates this work. More abstractly, as innovative as Rossini’s Otello was (and it was enormously innovative for its time), it belongs to an era where theatrical and musical conventions obtained, which have since been entirely replaced, particularly the conventions of Italian opera that were shaped during the second half of the 19th century by Verdi and, later, by Puccini and the masters of verismo.

But the opera world, and the world of classical music in general, has been showing signs of restlessness for over 30 years, with the advent of “historically informed performance” practice (“HIP” for short), and a broad renewal of interest in “early” music, which generally means anything before Beethoven, and the music and reputation of Rossini has benefitted from this trend enormously. The most important manifestation of this trend is the Rossini festival in Pesaro, Italy that has been gaining steam since the early 1980s, and by now has become a go-to summer destination for opera lovers. I don’t really know the exact age of the individual singers in this production, but i don’t think I’d be wrong in saying that most of them are young enough to have grown up in the midst of this sea-change in classical music. Thus, what may appear to be a novelty to audiences more used to Verdi and Wagner, seems to come naturally to this group.

So, basta! This is an extremely entraining revival of an unjustly neglected opera. Whether you know Rossini’s serious side, or are just curious, this is a great place to start. Congratulations to the Zurich Opera and everyone involved in making this available to an international audience. 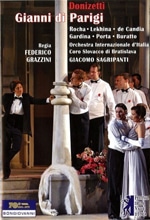 Cinderella, a fairy tale live is an artbook designed by Andrea Andermann and published by Rai Eri. It is based on the movie Cinderella, produced by the same Andermann, aired on June 3 and 4 of RaiUno: La Cenerentola by Gioachino Rossini, performed by the Orchestra Sinfonica Nazionale della RAI, directed by Carlo Verdone. In the video we offer the wealth of interpretations, sounds, costumes, scenes of this modern and classical Cinderella. 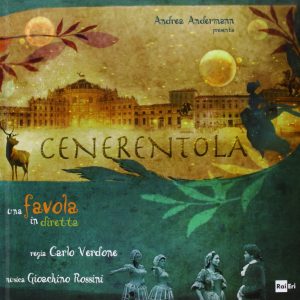 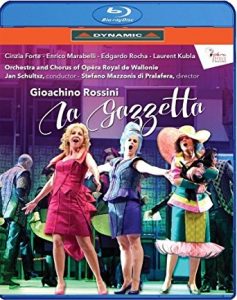 A true comedy of errors, Rossini’s comic opera La Gazzetta abounds in misunderstandings and plot twists. Based on a play by Carlo Goldoni, the plot revolves around the bizarre tale

of a man who decides to find a husband for his daughter by placing an ad in a newspaper. Directed by Stefano Mazzonis di Pralafera, this Liège staging of Rossini’s 1816 opera buffa was the closing production of Opéra Royal de Wallonie’s 2014 season. It includes, for the first time, a quintet which was rediscovered in 2012 by the librarian of the Palermo Conservatory. Authenticated by US musicologist Philip Gossett, this quintet has now been restored to its rightful place in Act One of La Gazzetta. Subtitles in Italian, English, German, French, Japanese and Korean.